First I have to admit, I'm a Q-tipper. That's right I know they say don't stick things in your ears but I do. At least 3 times a week I shove that cottony white stick right in my ear canal and just spin it around. It feels so good I could just move my leg up and down like a dog getting its belly scratched… ok that may have been a little TMI but well I do tend to overshare! While on vacation in California last summer I witnessed this! My friend Sara, the one holding the strange lighted device, swears by them. I thought that girl is crazy sticking something flaming in her sister-in-laws ear. Must be more of that granola and nuts she eats! That is until she showed me all the wax it pulled out of Colette's ear!
Garrett, my 9 year old, was blessed, by my mother, with narrow ear canals. Every month we would have to sit in tub with a syringe blasting his ears with water to soften the wax so it would come out. I decided to give it a go.
Here's my little trooper You might be asking what's an ear candle? Ear Candles are a therapeutic ancient practice that has been used for centuries in many cultures.Ear Candling involves placing a hollow cylinder tube with a narrow end at the opening of the ear. They are made with strips of cloth or muslin coated with wax and the opposite end is lit. This produces spiraling smoke and warmth which creates a vacuum to pull the wax out. It is very comfortable and you really don't feel anything. 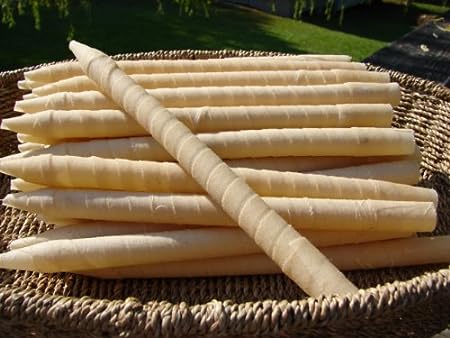 Sarah taught me to put it through a piece of tin foil so that if some of the ash falls off it won't burn you or your furniture. You can also use a paper plate. Now I know you all are saying really how can this work well I'm about to show you. If you are grossed out by bodily you may want to look fast but here is the was it pulled out of one ear. OK so I know you are like GROSS! But it really is cool to see how much comes out. Once we did the whole family and compared. I know we're just strange like that! Seriously you can hear better after this, you should totally give it a try! They are carried by most health food stores.. Let me know what you think if you give it a try.